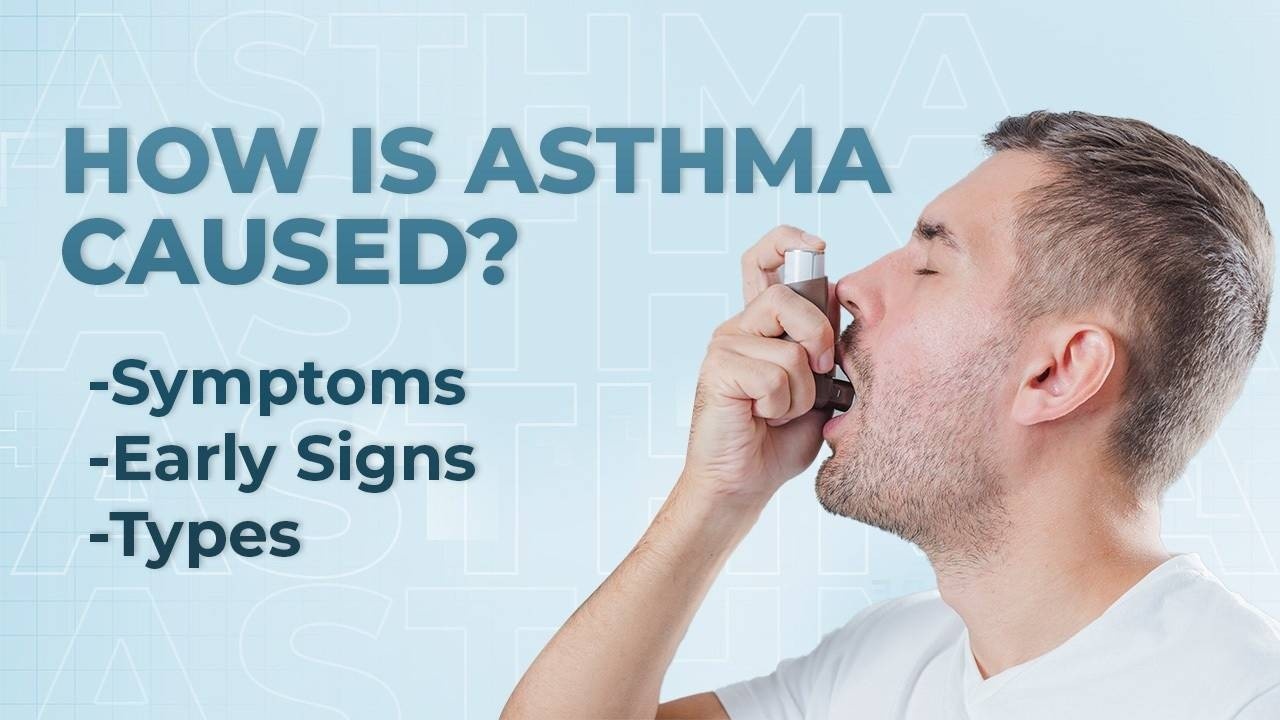 There are several different types of diseases of the respiratory tract. Some are temporary ailments that can be quickly treated, while others are considered dangerous and require long-term medications and therapy. Asthma is one of the most harmful diseases which affects both children and adults.

How is asthma caused? Can it be determined in time to prescribe timely and effective treatment? How do the symptoms of asthma appear? Is it possible to prevent their occurrence? How to help yourself or another person at the first sign of an asthma attack? And, most importantly, is it possible to heal asthma from its source? You can learn about this and much more from the information below.

Many people, even those who have only little knowledge of medicine, understand that the manifestation of asthma is associated with shortness of breath and lack of air. Asthma patients can even suffocate during asthma attacks if they don’t get proper medicines or medical assistance at that time. But why is this happening? Let's find out.

To put it simply, asthma is a pathology of the respiratory organs. The disease is a consequence of the inflammatory process that occurs in the respiratory tract. However, it is not an infectious disease. In the course of the disease, the airways adjacent to the lungs suffer changes. At the onset of an asthma attack, they narrow, which can cause the bronchi to become inflamed and swollen. As a result, they accumulate sputum, which thickens and prevents the patient from breathing normally. This can start an asthma attack.

The disease can develop in childhood and progress over the years. Thus, a chronic form of asthma occurs. Asthma works differently in men and women. Did you know that women are twice as likely to have asthma than men?

With timely treatment, alternative therapies, and a healthy lifestyle, the disease can be healed. At least it is possible to minimize the number of asthma attacks by reducing their undesirable manifestation. However, before talking about therapies, let's find out why the disease occurs, how it is classified, and also discuss in detail the main symptoms.

What Are The Causes Of Asthma?

Why asthma occurs in children or adults still needs to be fully understood. However, scientists have identified specific factors that are provocateurs. Here are some of them:

Now that we are acquainted with the causes of the disease, let's know about the first signs of asthma.

Even babies can have asthma. If we talk about the manifestations of the disease in newborns, then you should consider what the mother eats (if the baby is breastfed) or what is included in the mixtures (if the little one is given food).

The main asthma symptoms are spasms that form in the bronchi as a response to certain smells irritating a person. However, the disease does not always appear overnight. Often, the patient experiences alarming symptoms for a certain period, which may indicate the development of severe pathology.

What are the early symptoms that you need to pay attention to?

One of the first symptoms of asthma is a persistent urge to cough, which worsens at night. At this stage, the disease can be confused with the common cold. Cough with asthma is firm, dry, hysterical, and accompanied by a sore throat sensation. Also, the patient should get alerted by difficulty in breathing during a conversation, especially if taking a full deep breath is challenging.

Breathing may be accompanied by wheezing with a noticeable whistle. Shortness of breath that appears even with minimal exertion is another key symptom of asthma, indicating the onset of the disease. Nasal congestion and allergic rhinitis are other signs of bronchial asthma.

Depending on the symptoms, asthma is classified into two types: Bronchial Asthma & Cardiac Asthma, which are further divided into multiple classes. Here are the details:

The first stage is mild and is marked by one attack in three to four days. In this case, the exacerbation does not last long, and nocturnal attacks of suffocation occur once a month.

The second stage is characterised by attacks that occur no more than once a day. At the same time, nighttime suffocation disturbs the patient three or even four times a month. The disease is accompanied by other unpleasant symptoms - insomnia and pressure surges.

The third stage involves constant exacerbations. Feelings of suffocation appear at least once a day. At night the disease worries the patient every other day. Against this background, the patient's general condition worsens, and other organs suffer.

The fourth stage is a severe form of asthma. Attacks disturb the patient several times a day, very often at night. Because of this, the patient leads a minimal lifestyle, forced to stay at home all the time.

It is the most common type of bronchial asthma. This occurs alongside the body's response to all kinds of irritants (animal hair, fluff, smoke, pollen, aromas, dust, and so on). Accompanied by allergic rhinitis, sneezing, coughing and profuse lacrimation.

The treatment of asthma of this type is the appointment of antihistamines that suppress the body's allergic reactions.

It is diagnosed in a quarter of patients who have asthma. It can be provoked through aspirin and preparations based on it. Also, the irritant can be substances similar to aspirin in chemical composition. Such bronchial asthma is accompanied by frequent asthma attacks, nasopharynx inflammatory processes, and mucous membrane polyps.

Aspirin-induced asthma is rarely diagnosed in children. However, women in their thirties and forties are at risk.

Accompanied by a strong cough and shortness of breath, the result of increased physical activity. Stress-induced asthma treatment uses inhalers that can mechanically stop the attack.

As the name implies, the main symptom of this type of bronchial ailment is a prolonged solid cough. It can occur against the background of colds, infections and physical activity. This type of asthma is challenging to recognize and is diagnosed using a lung function test.

It occurs in a person directly at the place of work and is accompanied by symptoms such as coughing, lacrimation, and runny nose. The intensity of these manifestations subsides on weekends. Such a disease is often diagnosed in hairdressers, carpenters, and artists.

Symptoms worsen at night. This is very dangerous because at this time of day, due to the horizontal position of the body and sleep, the working capacity of the lungs decreases and the circadian rhythm is disturbed.

How does this type of disease manifest itself? Firstly, you should know that the disease develops against the background of cardiac pathologies, namely, disturbances in the work and functioning of the left ventricle. Because of this, the outflow of blood from the lungs is disturbed, blood pressure rises, and blood circulation in the brain worsens.

Attacks often occur at night, after stress or physical activity experienced during the day. What is the cause of the development of the disease? First, a sedentary lifestyle, being overweight, constant excitement or overwork, and alcohol abuse. Among the symptoms of cardiac asthma, difficulty in breathing when inhaling, swelling of the veins in the neck, pallor of the skin, agitation, panic during an attack, and profuse sweating are especially distinguished.

This type of disease is accompanied by releasing a large amount of sputum. In the initial stage of asthma, sputum is secreted in small quantities and is almost colourless. If the disease is not treated, the sputum becomes more abundant, and blood impurities are added, which becomes light pink.

As mentioned above, asthma is often diagnosed in childhood which is challenging to cure. However, in adolescence, the main symptoms of the disease can still disappear, if serious and thoughtful therapy is applied. In children, asthma has the following forms:

The disease is often caused by allergens and manifests in prolonged attacks, during which the cough can disturb the baby for several days. Then the child begins to feel good and leads an active lifestyle. This state is called remission. It is imperative that in the field of view of the baby, there are no pathogens that provoke his attacks. Therefore, caring parents must constantly adhere to these simple rules:

Also, of course, the baby should be shown to the doctor. It is important to contact a specialist and follow their recommendations when it comes to the child's health.

What to do if an asthmatic has an attack in your presence? First of all, you should calm the person and not panic. Next, you need to help the patient sit on a chair, unbutton or loosen his clothes if they are tight, open a window or use a fan to provide him with airflow.

It is important to encourage the person to breathe properly. If necessary, you can massage the wings of the nose. Be sure to use a special inhaler that asthmatics always carry with them, and also help the patient take drugs that block the allergic reaction. If the attack is prolonged, you need to call an ambulance.

What to do if you have asthma? Always carry an inhaler and other medications recommended by doctors to block an attack. Warn the people you work or study with that you may suddenly experience choking, and tell them how they can help you.

All these methods help you get symptomatic relief. Note that as discussed before, the primary root cause of asthma is imbalance immunity. To bring back balance and heal your asthma from its source, you can use time-tested alternative therapies to heal your asthma holistically. These therapies include,

Asthma is a chronic disease and a complication which can stay with you throughout your life, giving you life-long suffering and constant health issues. If you want to know more about healing your asthma holistically through three time-tested alternative therapies, head on to the free Mini-Course on Healing Asthma Holistically by RedAsh TV so that you can move towards having an asthma-free lifestyle. Stay fit!

Subscribe to get tips and tricks to level up your skills.

GET THE FREE GUIDE

Enter your details below to get this free guide.